Difference Between Paraphrasing And Rephrasing 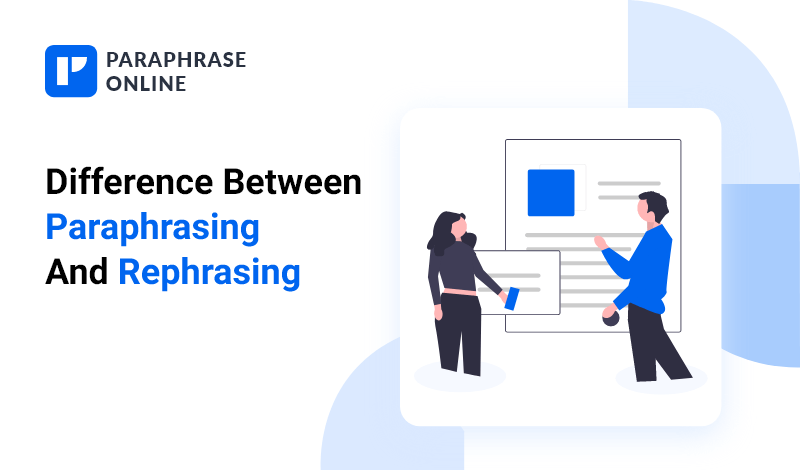 Paraphrasing and rephrasing are common among writers of all kinds. So, what exactly is the difference between them?

Paraphrasing and rephrasing are two of the most talked-about factors in writing. They allow writers to achieve many goals.

And, since 60% of content marketers require at least one piece of content in a day, it’s imperative for writers to employ these techniques.

However, somewhere in the world right now, much to the horror of a novice writer, they’ve just received an email about rephrasing their year-old article.

Now imagine if that was you and you didn’t know the difference between paraphrasing and rephrasing.

Not only will you get confused, but you might just botch the task. So, to avoid that in any case of writing, let’s talk about the differences between paraphrasing and rephrasing.

Paraphrasing is the process of rearranging content by using alternate words and synonyms.

The idea behind paraphrasing is to change the text but not alter the context. In other words, the concept behind said words remain the same, though words are presented in a different manner.

Paraphrasing is often attributed to the content’s tone. Therefore, one of the leading examples of paraphrasing would be changing text from active voice to passive, or vice versa. While the context doesn’t’ change in this case, the words surely do shift around.

Common traits of paraphrased text include:

This is one of the main reasons paraphrasing is a common practice to avoid plagiarism. By simply turning the text and making it their own, a writer can avoid duplicity by presenting the text differently.

Defining rephrasing requires us to look back at the roots of paraphrasing. For instance, there are a lot of things that are common between the two, such as:

These are all of the similarities that rephrasing has with paraphrasing. However, the one key difference between paraphrasing and rephrasing is their purpose.

While rephrase does all that paraphrase does, there’s one thing where the former triumphs over the latter

That is changing content to achieve better clarity. Because rephrasing isn’t only looking at one page of text and writing it in your own words on the next.

In fact, rephrasing is taking the idea and presenting it in your own words. In most cases, rephrasing serves the following purposes:

Now, that last point might be a bit confusing to you, as paraphrasing doesn’t change context. So, why exactly does rephrasing do that?

The key thing to understand here is that it doesn’t’ change the concept. Therefore, it can allow you to write in an opinionated or creative way, but the concept and the idea behind it would remain the same.

How Are The Two Different?

Now let’s talk about their differences; what exactly separates the two? The definition of both will give you an idea of how they differ.

But, we also talked about how they’re one and the same in many cases. So, let’s analyze about similarities first:

Now that the similarities are out of the way, let’s talk about the differences:

As you can see, there aren’t many differences, but the few that exist make these two rewriting techniques vastly different from one another. Another difference is perhaps their elementary usage.

For instance, a lot of school teachers tell young students to paraphrase to remember ideas better. Whereas rephrasing is followed by professionals and students of higher studies to describe something in their own words.

So, let’s say you want to explain something better, then you’d rephrase it. However, if you wish to achieve specific content tones, then you’d paraphrase.

And, if you want to remove plagiarism, then you can rephrase or paraphrase—depending on what other goals you might have. Therefore, the critical difference between the two is their purpose.

In order to advantage of today’s advanced AI and its role in paraphrasing/rephrasing tools, you need something outstanding. Therefore, to achieve similar results, we suggest that you use Paraphraseonline.io.

This outstanding paraphrasing tool allows you to determine the type of rephrasing or paraphrasing you require by separating them into four classes, such as:

These four modes can help you rewrite your text efficiently and seamlessly.

This tool also allows you to rephrase the content and paraphrase text quite effectively. But, here are two main reasons to employ it:

Here you can see the sidebar of the tool, which allows you to pick the mode that you want to use:

Since the AI knows the key differences between paraphrasing and rephrasing, it’s one of your best bets at achieving the objectives of rephrasing.

Paraphrasing is yet another key benefit of this AI-based tool, as it thoroughly recognizes the difference between the two.

That’s why this is one of your best bets at rephrasing or paraphrasing your text without confusing the two.