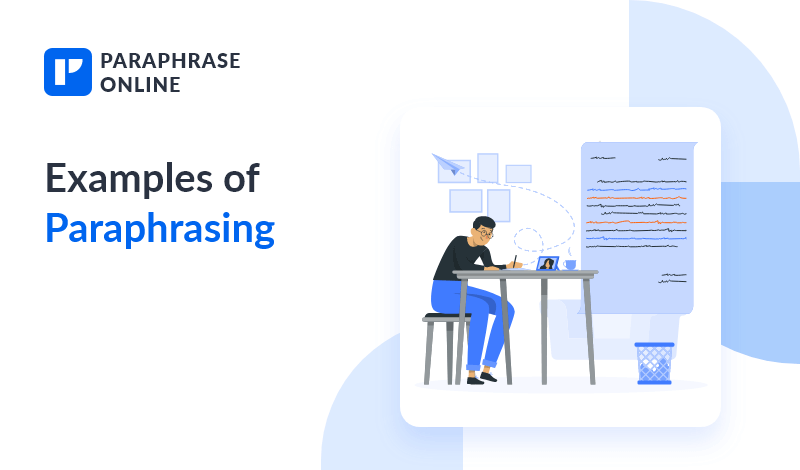 Paraphrasing is a great technique that can be helpful to different types of writers. However, people who may have not used this technique before could be a little confused as to what it actually is and how it can be practiced.

In this post, we’re going to be starting at the bottom by looking at what paraphrasing actually is. Then, we’ll move on to look at some of its examples so that you can get an idea about how you can incorporate them into your own writing.

Before we go into all the details, let’s first understand the basics of paraphrasing.

So, paraphrasing can be defined as the process in which a particular piece of content is rephrase using different words and phrases so that it looks different, but has the same meaning as the original.

Paraphrasing can be done for multiple reasons. Oftentimes, it can be done to portray an idea or concept with better clarity. It can also be done when a writer wants to borrow someone else’s words but without directly plagiarizing them.

There are a lot of different uses of paraphrasing, and as we said at the start, they can be useful for different types of writers.

Now that we’re done with the basic definition, let’s move ahead to discuss some examples of paraphrasing.

Paraphrasing is not of a single type. There are various modes and approaches for it.

For example, if someone wants to only change a piece of content lightly and not completely alter it, they can just opt for the standard ‘synonymizing’ technique.

On the other hand, if someone wants to completely change the look of the content and to publish it as their own, they will have to do a lot more.

So, considering these varying levels of paraphrasing, we’ll divide our examples in different categories and look at them one by one.

Let’s start with the most basic type i.e., the synonymizing approach.

As we said above, this type of paraphrasing is suitable if the purpose is not to completely revise the content. Rather, it can be useful in situations where someone needs to make a few changes for the sake of explaining the content with more clarity and accuracy.

In this approach, only a few selected words in the content are changed with their synonyms. Nothing else is done.

Let’s look at some examples of this method before moving on to discussing the other types.

Original Text: John found the dog to be very heavy. He lifted him and heaved to carry him back home. Once he was at the front door, John realized that he had been carrying a bear instead.

Paraphrased Text: John found the hound to be very weighty. He picked him up and heaved to carry him back home. Once he was at the front gate, John understood that he had been lifting a bear instead.

Original Text: John could not understand why his mother had added candies to the curry. He picked one up and put it in his mouth, just to realize that it was a red chili pepper.

Paraphrased Text: John could not comprehend why his mother had added toffees to the gravy. He lifted one up and put it in his mouth, only to realize that it was a red chili pepper.

In this type of paraphrasing, not only the words are changed with their synonyms, but the phrases as well.

As a result of changing the phrases, the structure of the sentence also gets changed a bit, but not a lot.

This type of paraphrasing can also be done when the intention is not to pass off some content as one’s own. That is so because even after the content has been paraphrased using this technique, it can be identified and matched with the original.

Nevertheless, here are some examples of moderately paraphrased sentences.

Original Sentence: There was no one in the street when John came to it in his car. However, he could see that the cats were watching him very suspiciously.

Paraphrased Sentence: Nobody was in the street when John came to it in his vehicle. However, he observed that the felines were watching him with suspicion.

Original Sentence: John could not understand where all his furniture had gone. Someone had put other stuff in his rooms. His kitchen was also looking different. When he heard the police sirens, John realized that he was walking in someone else’s home.

Paraphrased Content: John was in a quandary about where all his furniture had gone. Some had placed different things in his rooms. His kitchen also appeared different. After hearing the police sirens, John understood that he had been roaming around someone else’s home.

“Advanced” paraphrasing can be referred as the type of paraphrasing in which the content in question is completely modified. This involves, apart from changing the synonyms and the phrases, altering the sentence structure and order.

This sort of paraphrasing can be done when the intention is to make the content appear totally different from the original. For example, if someone wants to use an idea from a source without giving it (the source) the due credit, they can paraphrase it in this way.

Let’s look at some examples of this type of paraphrasing:

Original Sentence: The road was empty except for a big truck. John thought he could easily dodge it. He sped up his vehicle. The truck, however, revved and kept on coming head-on.

Paraphrased Sentence: John thought he could easily bypass the solitary truck on the road. He revved his car but the truck kept coming straight at him.

Hopefully, after looking at these examples, you know a bit more about paraphrasing and how it can be done in different styles.

Paraphrasing is a useful technique, and it can be particularly helpful for writers who have to come up with the content on a regular basis. By paraphrasing content, writers can also actively incorporate research into their work without worrying about committing plagiarism.